A fine line between love and hate?

I hate cilantro. I think it tastes like soap. To me, it ranks right up there with Jello, sushi, and chick-peas on the grossness scale. But, I am a big believer in second chances. As in, I’ll try it again, and maybe it won’t be so awful this time.

I guess, there are some things I like that are generally made with cilantro. It is a key ingredient in most salsa’s, and is the base in the sofrito or recaito that starts off many Puerto Rican dishes that I grew up eating -although those are often made with cilantro’s cousin plant, culantro.

(Below left- cilantro, below right- culantro, seen in a market in the Dominican Republic) 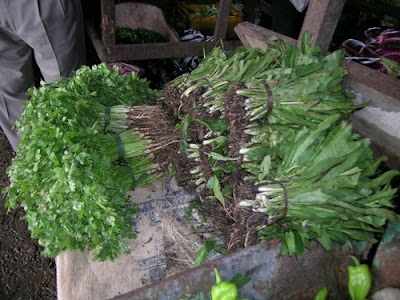 But in those, the cilantro takes a backseat to the other flavorful, fragrant ingredients. When it’s in the forefront and all I can taste is soap, that’s when I have a problem.
My mom, and several aunts like to rave about how delicious cilantro is, and the more the better. But to me (and my sisters for that matter)- it’s kinda like topping an ice cream sundae with seaweed. It ruins it. And I’m not the only one that thinks so- check out www.ihatecilantro.com - these people are serious!

So imagine my surprise when, flipping through a copy of Real Simple magazine, I came across a whole section devoted to burgers (it is summertime, after all), and decided the one that looked absolutely delicious, that I HAD to try, was a salmon burger, topped with avocado, lemon juice, and cilantro. Yes, that’s right, CILANTRO. I’m not sure exactly what about it that made me think it wouldn’t make me gag. Maybe the fact that salmon and lime are two strong flavors, and even in my imagination, I envisioned them being the dominant tastes? Whatever the appeal was, it was strong enough to make me decide to try these burgers out, cilantro and all.

Cut the salmon into 1-inch cubes. 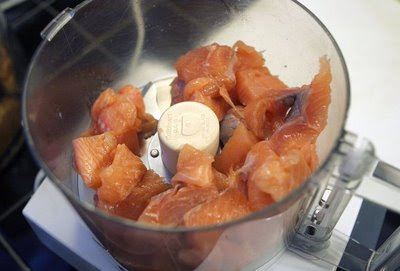 Put in a food processor and pulse 3-4 times (it will still be a little chunky). Add the green onions, about a 1/2 tsp salt and 1/4 tsp black pepper, and pulse one or two more times, until combined. 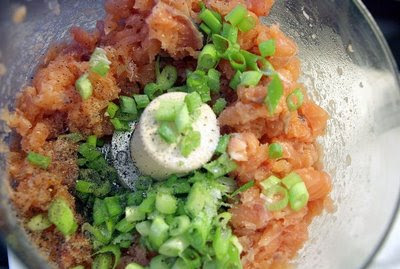 Form the mixture into 5 patties, and cook on stovetop or grill on medium-high heat for about 3-4 minutes on each side, until opaque throughout. Flip only once and do not press or flatten. Serve on toasted bakery rolls, and top with 2-3 slices of avocado and cilantro, and squeeze the juice from one or two lime wedges over it. 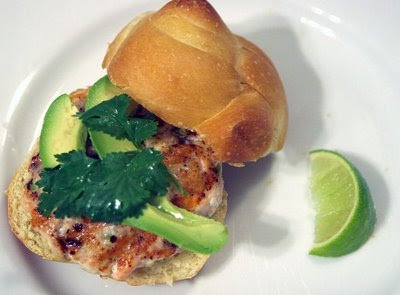 This is one of the easiest, and quickest recipes I’ve ever made. The burger itself is incredibly simple to make, and took only about 5 minutes total. The fresh flavor of the fish, green onions and lime shines through, with the avocado and cilantro adding depth and a little sophistication. And, as strange as it feels for me to say this, it wouldn’t be the same without the cilantro.

Thank goodness for second chances.
Posted by Brenda at 11:21 AM