What do you call a person who volunteers to make an elaborate wedding dinner for 60-70 people? Ambitious. Crazy. Out of their mind. Or.... Brenda.

At the start of September, my sister Angie got engaged... then decided she wanted to get married sooner rather than later. She and Ben are expecting a new baby in February, and with all the hustle and bustle that a new baby brings, coupled with the fact that Angie is planning to begin pursuing her nursing degree in the fall, she decided it was now or never. So originally, she wanted to do something really small. And I mean SMALL. She was perfectly happy at the thought of having just parents, siblings and her daughter and his son there. I thought it sounded great. Small, simple, and nothing like the zoo that surrounds most weddings. Don't get me wrong, I am a photographer and shoot weddings fairly regularly, but my personal style is much simpler than most weddings I am at.

My mom, however, had other plans. See, my older sister, Mely, got married at the town hall in Fayetteville, NC, days before her soon-to-be husband, Aaron, was deployed to Iraq, and I don't plan on being married anytime soon, to say the least. So she saw this as her big chance to have a beautiful wedding for one of her daughters. She wanted to invite family, friends, you name them. So, we made a list, and it turned out to be about 60-65 people. Ok. But then there was the October 18 wedding date that Angie and Ben had decided on. And the fact that planing a wedding in six weeks was a really daunting task, especially when it wasn't something any of us had planned for, in terms of budget. We began working out the details. Angie wanted to be married outdoors, and the arboretum at Conn College was perfect. Ben could rent the clubhouse at the local marina where his grandfather owns a slip at, for the reception. Then there was the matter of the food. My mom had a lot of ideas, and so did I. I thought that a fall themed menu would be fitting, and planned everything out. Here is the menu I created: 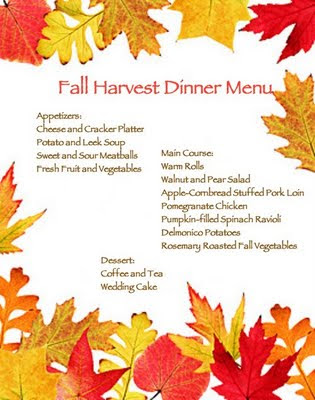 I started testing out my recipes, adjusting them to our tastes, I priced all the ingredients, and created a calendar of the week of the wedding, planning out each step of each recipe. My mom still worried that I couldn't do it. For some reason, she was under the misguided impression that I thought I was going to do it all by myself. I assured her and reassured her that I would delegate responsibilities as I saw fit in order to have everything prepared on time.

About three weeks before the wedding, my main concern was getting the ravioli made, because I'd insisted that because of price, we would have to make them ourselves. I would have just dropped it from the menu, but my sister and Ben tried the ones I'd made while testing my recipes, and loved them. So they stayed on the menu, and in the span of about one week, I made about 450 raviolis, with some help from my mom and roommate Melissa. It was a HUGE task for a novice to pasta-making, but we did it and they were delicious.

And then, the unthinkable happened.

About a week and a half before the wedding, we did a final count of guests. Our guest list of 60 had ballooned to 80 people, with relatives who live long distances away, who we had thought would never be able to make it, RSVPing that they would attend. In my book, the more the merrier, but when we went down to the marina to figure out where we would squeeze the extra guests, we realized it just wasn't gonna happen. We went into panic mode. What the hell were we gonna do?

We started calling around to area hotels, knowing we were going to totally blow our budget, but not having any alternative. Through a stroke of luck (and because the wedding was on a Sunday) the Mystic Hilton turned out to be easiest on our wallets (also, it helped that since it was just a week away at this point, the wonderful event staff there waived the room reservation fee). We ended up having a fairly standard wedding buffet catered by the hotel, all crises were averted, and it was a beautiful wedding. 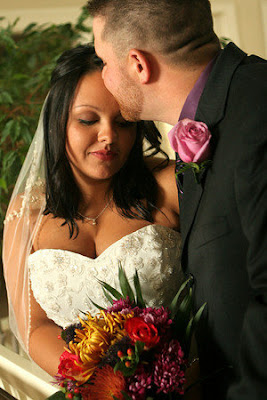 But now I have 450 Pumpkin-filled Spinach raviolis in my mom's freezer. I decided I would package them in family sized quantities in ziplock bags and give them to family, friends, etc. And now, I think that pumpkin ravioli is SO appropriate for Thanksgiving.

If you've never made pasta before (which I'm going to assume you haven't, I mean, really, who does that, besides a little old Italian granny?), it is intense. You have to make the pasta dough, let it sit for a couple hours, make the filling, roll the dough out, portion the filling on the dough, CAREFULLY seal them closed, and cut them apart.

Here is the recipe:

To make the dough:
Put the flours, and salt in a food processor and pulse to blend. 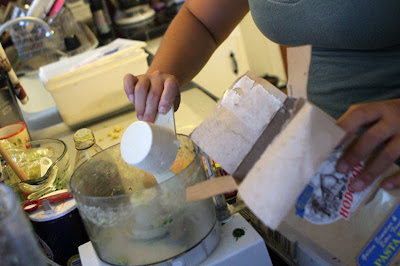 Add the eggs, spinach, and olive oil into the covered processor and blend until a ball forms. Cover dough tightly with plastic wrap and let rest for 2 hours at room temperature before rolling out or refrigerating. 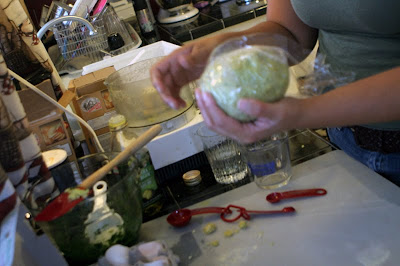 To make the filling:
In a saucepan, melt the butter, then add the pumpkin and cream. Stir until combined. Add the herbs, and simmer over low heat for an hour, stirring occasionally to prevent scorching, until the liquid has evaporated. Let cool before filling the ravioli. 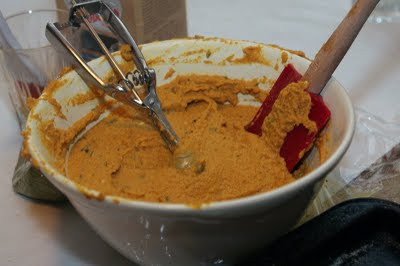 To assemble the Ravioli:
Start by cutting your ball of pasta dough in half. 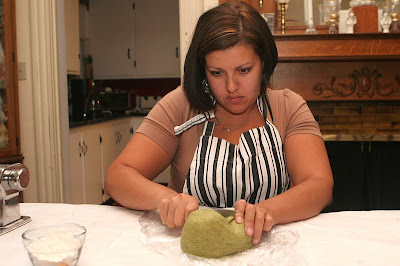 Then, begin rolling it into long strips by first shaping it into a long, flat piece. 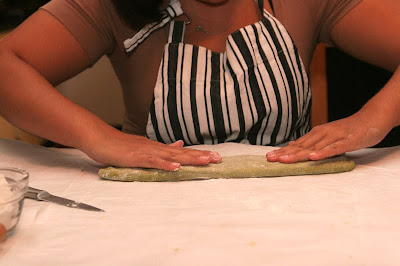 Then roll it through your pasta machine, starting on the thickest setting and gradually working down to the second thinnest setting. 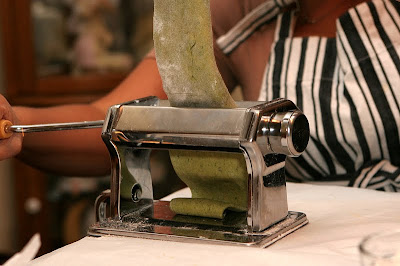 Once your strips are made, put about one teaspoon of filling for each ravioli about 1 inch apart on half of your rolled dough. Then, brush the other half with the beaten egg, and carefully lay the brushed side down over your filled pasta, being sure to seal the edges with as little air as possible left inside. 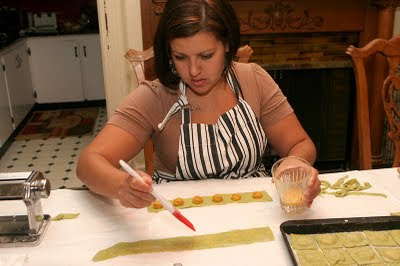 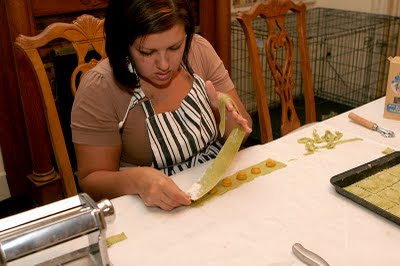 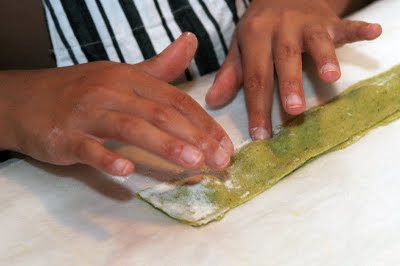 Using a ridged pasta cutter or a sharp knife, trim the edges and cut your ravioli into squares. 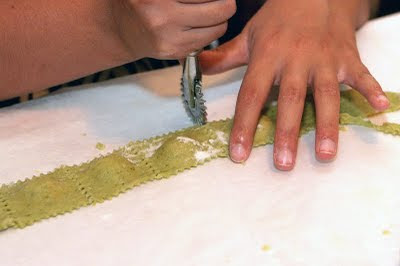 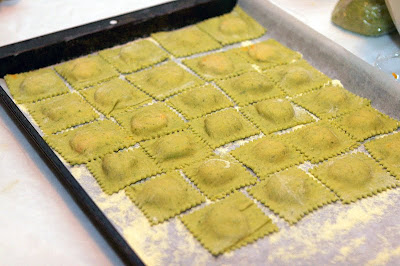 Freeze and package in ziplock bags.

I had never even considered making my own pasta before. The thought just never entered my mind. But I found this Wolfgang Puck recipe I thought sounded REALLY good, and wanted to try it, so I did. It was a lot of work. It took forever, even after I bought a pasta roller for $34.99 at Bed, Bath and Beyond (I originally tried to roll it out by hand, which was a BAD idea. It was really hard to do and I couldn't get it anywhere close to as thin as I needed it). 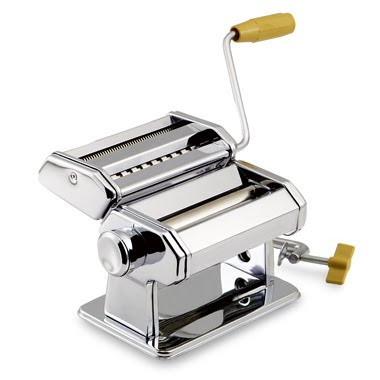 I ended up using my mom's entire dining room table to do it, (since I was making such a large quantity- I made 8 batches!), and lined the whole table with sheets of parchment paper. 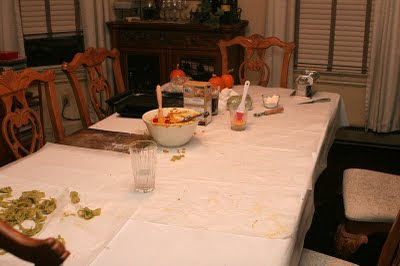 I figured out that I was best off cutting the long strips into foot-long sections, so they would be easier to handle. I eventually got the feel for sealing them properly, without air inside (they can potentially burst when cooking if they have air in them), and found that if I let them freeze for about an hour I could transfer them to ziplock bags for more long-term freezer storage.

The original recipe includes a sage cream sauce to serve them with, but I think they are delicious with just a little melted butter, parmesan, salt and pepper, and a few sage leaves for a garnish.

Anyone interested in a bag of frozen, handmade, pumpkin ravioli?
Posted by Brenda at 12:30 PM