My dad has 10 brothers and sisters, and my mom has three. As you can imagine, I have a TON of cousins- I think over 30 when you count cousin’s children. When my family gets together, it’s a little bit of a mob scene. And I wouldn’t have it any other way.

Of course, food is always a major element of those gatherings. Being both Puerto Rican and Filipino, and having family members that span just about every ethnicity from white to black to Native American, we always have a huge selection of cuisine’s to choose from. And, as you probably realize from the varying recipes I’ve written about in previous entries, I’m game to cook anything and everything.

One of my favorite things to make to feed a bunch of people is lasagna. In fact, last December, when I invited my Auntie LaLa and Uncle Ringo (…your probably thinking “their names are what?!?!” Well, really, their names are Dolores and David, but that’s no fun now is it? I’ve never called either of them by their real names and never will!) over for dinner before they went to Virginia to spend Christmas with another aunt of mine, that’s what I made. I would have loved to invite more of my family over… but realistically, it was a tight squeeze having my aunt and uncle, parents, sister and niece in my kitchen at once.

I make my lasagna with whole wheat noodles ( I know that doesn’t surprise you), a mixture of sautéed ground chicken, spinach, mushrooms, onions, and garlic, fresh basil and parsely, sliced roma tomatoes, and sliced fresh mozzarella cheese, on top of a few ingredients that I think lasagna wouldn’t be lasagna without. I make it so that you can taste the fresh, classic, Italian flavors, but it still tastes like comfort food. Here’s my recipe: 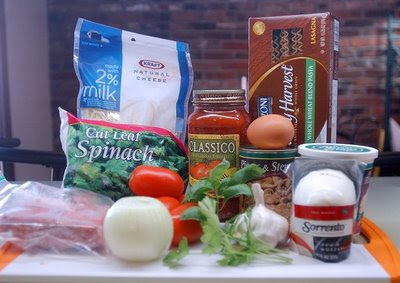 Boil a pot of water and cook lasagna noodles according to package directions. While the noodles are cooking, brown the chicken over medium-high heat for about 5 minutes, then add the chopped onion, garlic, spinach, and mushrooms. Sauté for another 5-10 minutes, until onions are translucent, then remove from heat. 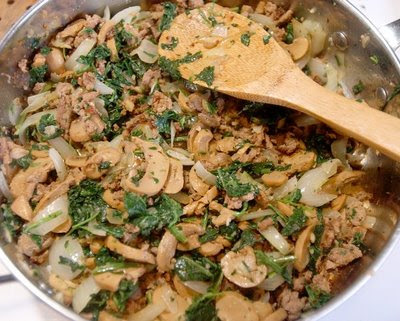 In a small bowl, combine the ricotta, egg, and chopped basil and parsley. 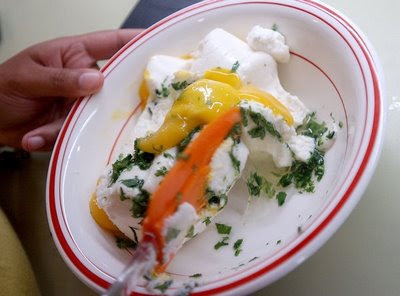 In a 13x9 inch pan, begin layering your lasagna. Start with a layer of sauce, then noodles (three for each layer, lengthwise), ricotta mixture, chicken mixture, sauce, then shredded cheese and roma tomatoes, loosely spaced. Next a layer of noodles, then all layers except for tomatoes. The third and final layer should have everything, including tomatoes. Finish it off with a layer of noodles, ricotta mixture, shredded cheese, then top with sliced mozzarella and tomatoes. Cover loosely with foil and bake for 40 minutes at 400 degrees, until bubbly. After 40 minutes, remove the foil and turn the oven up to broil for an additional 5-10 minutes, watching closely so that it doesn’t burn. 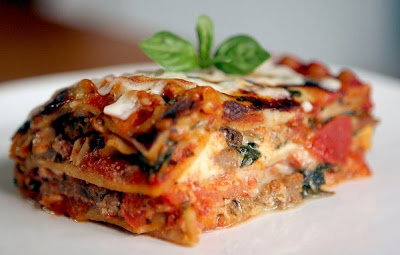 Like I said, I normally make at least two pans of this to feed my army-sized family, but this time, I made it just for me and my sister, and sent some over to my parents too. I use a mandolin slicer to slice both the roma tomatoes and mozzarella (I got mine at Bed, Bath and Beyond for $11.99). Also, if you ever use a mandolin slicer, don't follow my lead in the picture below and hold whatever you're cutting by hand- I'm lucky I didn't slice off one of my purple tipped fingers! 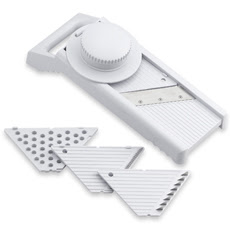 Angie kept me company in the kitchen while I made it, so I had her mix together the ricotta mixture. She quizzically asked me why in the world she was mixing an egg into it, and I explained to her that it helped hold it together. I had tons of leftovers, which was fine with me- I brought it to work for dinner for a few nights.
Posted by Brenda at 3:06 PM