Yesterday, I went to Saint Sebastian’s School in Middletown, where preschool teacher Nicole Milardo runs a 5-week after-school cooking club for students of all ages. I met kids from 5-12 years old, and took pictures of them for picture page that will run in Monday’s edition of The Middletown Press. The kids were elbow deep in chocolate chip cookie dough when I arrived, and gave me plenty of opportunities to laugh and smile as I observed them. 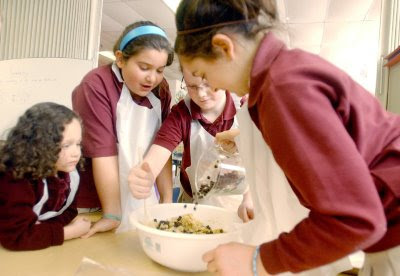 Above: Students of Saint Sebastian's School in Middletown make chocolate chip
cookie dough Wednesday, March 4, 2009 during a cooking club meeting.
Bella, a five-year-old in kindergarten, remarked to me about how her grandmother does a lot of cooking, when I asked them about who they help in the kitchen at home. When I queried a group of about 8 girls if they planned to share their cookies with their parents and siblings when they got home, I was met with a mixed chorus of “yeses,” and (more emphatic) “NO’s!”

Nicole Milardo, who runs the school’s cooking club, told me that she loves to cook, and wanted to share that with the students. She did admit that she prefers cooking to baking (like me) and said that Lisa Nettis, who is a paraprofessional in Milardo’s classroom, is the go-to person when it comes to baking.

Last week, at the club’s first meeting, the group made an oatmeal-based, no-bake, type of cookie, which, to Milardo’s dismay, the kids weren’t thrilled with. But this week, they watched, wide-eyed, full of ready-to-burst excitement as Milardo carefully removed the trays of hot cookies from the oven. 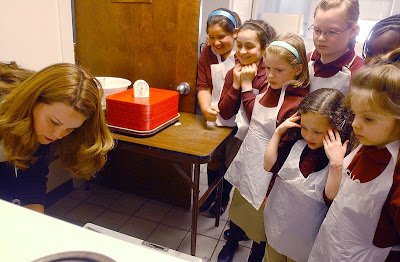 Above: Students of Saint Sebastian's School in Middletown watch as Cooking Club
instructorNicole Milardo, who teaches preschool at Saint Sebastian's, takes a
sheet of chocolate chip cookies out the oven Wednesday, March 4, 2009
during a cooking club meeting.
The students, like my neice, Nadya, who regularly gets “culinary lessons” from my mother, seemed as excited at the prospect of warm, melty, chocolatey cookies as they were to dig their hands in the bowl of dough and get dirty. They are learning the lesson of what it means to create something with their own two hands, and the happiness that that creativity can bring themselves, and others. 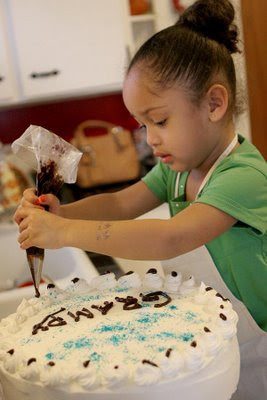 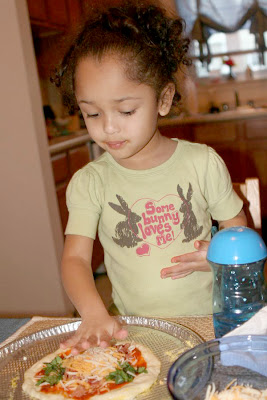 Above:Top- Four-year-old Nadya Murphy decorates a cake for her grandfather,
under the guidance of her grandmother. Bottom- Murphy makes a homemade pizza
decorated with basil for eyes and bacon for a smiling mouth.
To view more photos of Saint Sebastian school students making chocolate chip cookies with teacher Nicole Milardo, go here, to the Press' online photo gallery.
Posted by Brenda at 3:58 PM